Dick Vitale, ESPN College Basketball Analyst - Dick Vitale, college basketball’s top analyst and ambassador, joined ESPN during the 1979-80 season -- just after the network’s September 1979 launch -- following a successful college and pro coaching career.  In 2008, Vitale received the sport’s ultimate honor when he was selected as an inductee into the Naismith Memorial Basketball Hall of Fame (after being named a finalist in 2004, 2006 and 2007) as a contributor. 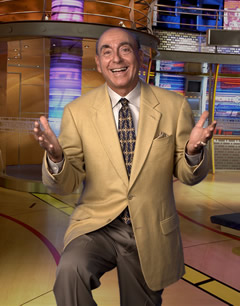 His thorough knowledge of the game is brought forth in an enthusiastic, passionate, sometimes controversial — but never boring — style. In February 2004 and 2006, Vitale was named a finalist for induction into the Naismith Memorial Basketball Hall of Fame as a contributor.

Vitale called ESPN’s first-ever NCAA basketball game – Wisconsin at DePaul on Dec. 5, 1979 (a 90-77 DePaul win).  Since then, he’s called close to a thousand games, including NBA contests for ESPN during the 1983 and ’84 seasons.

But Vitale’s talents and influence extend way, way beyond just game analyst.  He provides commentary on a variety of topics in his "Dick Vitale's Fast Break" segment which airs Wednesday evenings during the college basketball season on SportsCenter, and serves as a college basketball analyst for ESPN Radio, including appearing each Monday on the “Mike & Mike in the Morning” show.  He has been a college basketball analyst for ABC Sports since 1988, and has also covered the NBA Finals and the 1992 Summer Olympics for ABC Radio.  His weekly ESPN.com column is one of the web site’s most popular features.

Also, he’s a regular contributor to ESPN The Magazine, and, of course, has his own web site — www.dickvitaleonline.com.


Vitale is also a columnist for Basketball Times, has served as a guest columnist for USA Today since 1991, and has been a featured guest on virtually every sports radio station across the nation. He’s also been profiled by a wide array of national magazines, ranging from Sports Illustrated, Sport and The Sporting News to People, Playboy and Travel & Leisure. He received eight CableACE nominations, and captured awards in 1994 and 1995.

“I’m living the American dream,” Vitale once said. “I learned from my mom and dad, who didn’t have a formal education, but had doctorates of love. They told me that if you gave 110 percent all the time, a lot of beautiful things will happen. I may not always be right, but no one can ever accuse me of not having a genuine love and passion for whatever I do. And ESPN has been grateful enough to recognize this.”

And while his knowledge, preparation and enthusiasm are unparalleled, his “Vitale-isms” have unwittingly taken on a life of their own. Just a few of his many household phrases: “Awesome, Baby!,” “Get a TO, Baby!” (call a timeout), “PTP’er” (prime-time player), “M & M’er” (a mismatch), “Rolls Roycer” (a flat out superstar), “diaper dandy” (freshman star), “All-Windex Performer” (ferocious rebounder) and “Maalox time” (the final minutes of a close game). Vitale credits Hall of Fame broadcaster Jim Simpson, who he teamed with in the early 80’s, in helping him develop his broadcast style.

But Vitale’s roots are in teaching the game he’s loved since a child. Following college, he got a job teaching at Mark Twain Elementary School (Garfield, N.J.) and coaching junior high school football and basketball. He began coaching at the high school level at Garfield High School, where he coached for one season (1963-64). He then earned four state sectional championships, two consecutive state championships, and 35 consecutive victories during his seven years at his alma mater -- East Rutherford, N. J., High School (1964-70). He joined Rutgers University for two years (1970-72) as an assistant coach, helping to recruit Phil Sellers and Mike Dabney, two cornerstones on an eventual NCAA Final Four team (1976).

Vitale then coached at the University of Detroit (1973-77), compiling a winning percentage of .722 (78-30), which included a 21-game winning streak during the 1976-77 season when the team participated in the NCAA Tournament. Included in the streak was a victory in Milwaukee over Al McGuire's eventual national champion Marquette team. In April 1977, Vitale was named Athletic Director at Detroit and later that year was named the United Fund's Detroit Man of the Year. In May 1978, he was named head coach of the NBA's Detroit Pistons, which he coached during the 1978-79 season prior to joining ESPN.

The always-energetic Vitale is a favorite endorser among a wide array of major corporations. He’s also one of the nation’s most requested public speakers, providing motivational speeches to numerous leading corporations and organizations across the U.S. In 1987, he signed an exclusive contract with the Washington Speakers Bureau.

Vitale is also quite the philanthropist. He’s on the Board of Directors of The V Foundation, a non-profit organization dedicated to finding a cure for cancer and founded in 1993 by ESPN and the late Jim Valvano (and an organization with has since raised millions of dollars). He has co-chaired with Mike Krzyzewski and John Saunders the annual V Foundation Golf Classic and hosts an annual V Foundation Gala in Florida which gathers numerous celebrities to raise money and honor individuals such as Krzyzewski, Bob Knight and Pat Summitt.

For many years he’s awarded five scholarships annually to the Boys & Girls Club of Sarasota (Fla.). His involvement with the organization was highlighted in April 1999 with the “Dick Vitale Sports Night,” an annual banquet that has raised more than $600,000. In April 2000, in recognition of Vitale's support for the Boys and Girls Club, it was announced that a new building would be named The Dick Vitale Physical Education and Health Training Center. Vitale was inducted into the Sarasota’s Boys and Girls Club Hall of Fame at the 2001 Dinner. In 2002, Sarasota Magazine named him one of the areas most influential citizens.

Vitale’s also a member of advisory boards for the Harlem Globetrotters and the Henry Iba Citizen Awards. Additionally, he participates on selection committees for both the Naismith and Wooden Awards and is a member of the Associated Press voting panel for the Top-25. He is also a voter for the Hall of Fame’s Bob Cousy Awards.

And Vitale is a popular figure even outside of sports television. He’s made cameo appearances in several movies as himself: The Naked Gun: From The Files of Police Squad! (1988, starring Leslie Nielsen), Hoop Dreams (1994 award-winning documentary), Blue Chips (1994, Nick Nolte), The Sixth Man (1997, Marlon Wayans and Kadeem Hardison), He Got Game (1998, Denzel Washington and Ray Allen), and Love and Basketball (2000). In 1995’s Jury Duty with Pauly Shore and Tia Carrere, he played “Hal Gibson.” And in 1992, he teamed with Jim Valvano to play furniture movers (“V&V Movers”) on the hit series The Cosby Show.

He was even the subject of a David Letterman Top-10 list – “Top Ten Signs Dick Vitale Is Nuts!” -- in 1996 - where he even read the list on the show (a couple of gems: “I’ve referred to everything as baby, except an actual baby” and “I keep repainting the roof of my house to match Dennis Rodman’s hair”). In March 1999, HBO’s Real Sports profiled Vitale.

Vitale’s also authored nine books, including one children’s title, Dickie V’s ABC’s and 1-2-3’s (2010). Dick Vitale’s Fabulous 50 Players and Moments in College Basketball (2008) and 2003’s Living a Dream (Reflections on 25 Years Sitting in the Best Seat in the House) were both co-authored by Dick Weiss. In 1988, Simon & Schuster published Vitale, an autobiography with Curry Kirkpatrick, which was issued in paperback in 1989. In 1991, Time Out Baby!, his second book was published. The book, written with Weiss, chronicled the 1990-91 season. In 1993 his third book, Tourney Time, was published. In 1994, Dickie V's Top 40, his fourth book, was published. In September 1995, he co-wrote a fifth book, also written with Weiss, called Holding Court: Reflections on the Game I Love. His sixth book, also with Weiss, was released in 1999 – Campus Chaos: Why the Game I Love is Breaking My Heart. He also had popular home videos distributed by ESPN Video -- Time Out Baby! Dick Vitale's All Time College Hoops Superstars and Dick Vitale’s Dreamtime, Baby.

Recognition for his achievements and contributions to a wide array of areas are quite numerous. He was named Honorary Alumnus by the University of Detroit in 1976, and voted Man of the Year by the Detroit Athletic Club in 1977. In 1978, he was presented with the Greater Detroit Community Award by the Hartford Insurance Company.

In addition, Basketball Times named Vitale one of the sport’s Five Most Influential Personalities of 1983, less than four years after entering the TV business. In 1988, he was presented with an Honorary Citizens Award by Father Flanagan of Boystown. In 1989, Vitale was recognized by his peers as the American Sportscasters Association “Sports Personality of the Year,” while the NIT Metropolitan Media did the same in 1991.

In 1995, he was honored by Magic Johnson's Roundball Classic for his outstanding contribution to youth and also received the John Domino Award for Professional Service from St. Bonaventure University and the Empire Sports Network. He also received the Phil Rizzuto "Scooter Award" as the most caring broadcaster in the N.Y.C. metropolitan area, as well as the Black Coaches Association (BCA) honor for dedication to youth. In 1996, he was named Man of the Year by the Make-A-Wish Foundation of Suffolk County (N.Y.) and has also been feted by roasts at Seton Hall, the University of Detroit and the Atlantic Coast Conference.

A few of Vitale’s recent prestigious honors: The University of Notre Dame presented him with a honorary degree in 1997, while he was also recognized with the Ronald Reagan Media Award as an outstanding media personality, as presented by the United States Sports Academy. In 1998, he was awarded the Basketball Hall of Fame’s prestigious Curt Gowdy Media Award, the Hall’s highest honor bestowed upon a journalist outside of enshrinement. And in 1999, the Sons of Italy presented him with a Lifetime Achievement Award and named him Man of the Year. In 2000, Vitale was recognized with the NABC Cliff Wells Appreciation Award for outstanding service to the college basketball coaching community and college basketball in general, and in 2001, the College Sports Information Directors of America (CoSIDA) presented him with the Jake Wade Award, for contributions to college athletics and in 2008, CoSIDA honored Vitale with the prestigious Keith Jackson Eternal Flame Award given to an individual who, or an organization which, has made a lasting contribution to intercollegiate athletics, has demonstrated a long and consistent commitment to excellence and has been a loyal supporter of CoSIDA and its mission.

In 2002, the Florida Association of Community Corrections presented him with their President's Humanitarian Award for his work with young people, while in 2003, Vitale was honored with the first-ever Ethics and Sportsmanship in Sports Media Award given by the Institute for International Sport, as well as the National Pathfinder Award, co-presented by Indiana Sports Corporation and Indiana Black Expo, to individuals who have demonstrated a dedicated commitment to improving the lives of America’s youth. In 2008, he was selected as the recipient of the 2008 Naismith Men’s Outstanding Contributor to Basketball (pays tribute to individuals who made a significant impact on college basketball). Additional recent awards include the John Wooden Pyramid of Success Award in 2009 and in 2010, both the Ronald McDonald House Man of the Year Award of Excellence and the Make-A-Wish Chris Greicius Award given for exceptional dedication to helping grant the wishes of children with life-threatening medical conditions.

Born June 9, 1939, in East Rutherford, N.J., Vitale and his wife, Lorraine, have two daughters, Terri and Sherri, who both attended Notre Dame on tennis scholarships, and who both graduated with MBAs. The Vitale’s proud involvement with Notre Dame includes the endowment of the Dick Vitale Family Scholarship, presented annually to an Irish undergraduate who participates in Notre Dame sports or activities and does not receive financial aid. Recipients have included the school’s Leprechaun mascot, cheerleaders and band members.

“The Gonzaga-UCLA game was as good S it gets "