»UC Riverside and the terms of Division I survival in the season of COVID-19  »Newcomer Impact Rankings: Which freshmen, transfers will determine team fortunes?  »Transfers Sarr, Toppin eligible for Kentucky  »Marquette pauses programs after COVID positives  »PSU's Chambers resigns after probe into conduct 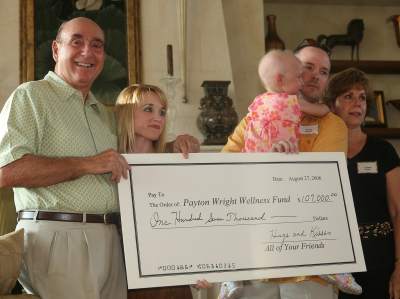 As it appeared on www.dickvitaleonline.com in August 2006 by DIck Vitale:

"I was overwhelmed by the support in my Lakewood Ranch and Bradenton neighborhoods. So many beautiful people rallied around Payton Wright, a four-year old girl with a very rare brain cancer. I am so proud of the people in the area as they showed so much class, responding in a positive way.

They came out to support Payton and her family. She has been undergoing chemotherapy both in All-Children's Hospital in Florida and now at Duke. The parents, Holly and Patrick, have gone through so much, watching their girl go through such tough times. They are so strong and courageous.

Holly and Patrick spoke to the crowd and it was heart-wrenching. There wasn't a dry eye in the house.

In less than four weeks, we raised over $107,000 for the Payton Wright Wellness Fund. She and the family face such a tough task.

Our house was filled with such love and jubilation, though it was heartbreaking when Payton was in so much pain and had to leave. I can't thank people enough ... they extended a hand to a family in need. That is so special to see people coming through. That is called love and it means so much when you bring a smile to other people's faces.

There was other good news when the Jimmy V Foundation announced a research grant in Payton's name for $50,000. I am so proud to be a member of the board of directors of the V Foundation. They had a great weekend at the V Foundation golf tournament in Cary, North Carolina as well. It is so important to beat the dreaded disease of cancer.

Thanks also to Mike and Mike of ESPN radio and others that helped to support this event."

“We need to take this Coronavirus seriously. Listen to the experts."