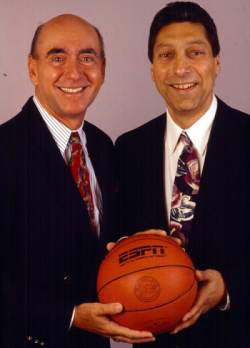 "When the Board of Directors for The V Foundation for Cancer Research was being formed more than a dozen years ago, Jim Valvano’s friend and broadcast colleague Dick Vitale was a natural choice to help keep Jim’s “Don’t Ever Give Up!” spirit alive.

Since then, The Foundation has raised more than $60 million for cancer research, funding hundreds of research grants nationwide. Dick Vitale has played a vital role in accomplishing the three objectives of all great board members – creating awareness, linking and introducing business and private connections, and raising funds – all to help support The V Foundation’s mission to finance cutting-edge research to help find cures for cancer.Dick has used his personal and professional contacts to help generate a number of new donors to The V Foundation, resulting in significant financial contributions annually.

Dick uses his vast celebrity on radio and television broadcasts and through the print media, during his prolific public speaking schedule and at his book signings to bring awareness to The Foundation. This is best displayed with his impassioned messaging during the annual Jimmy V Basketball Classic to both the fans at Madison Square Garden and a world-wide ESPN television audience.

Most recently, Dick and Lorraine Vitale opened their hearts and beautiful Florida home to host the “Dick Vitale Evening with the Stars,” resulting in the single most successful fundraiser held at a private home in their Florida area. This kick-off will result in future similar fundraisers throughout the area.

“Dick Vitale brings the same passion he displays for college basketball to The V Foundation for Cancer Research,” said Foundation CEO Nick Valvano. He generously shares his celebrity and credibility to promote The Foundation. Whether it be opening his home, corporate speaking engagements, or sharing his vast network of business and personal contacts, Dick relentlessly and passionately generates donors and friends for The V Foundation, as well as awareness of The Foundation's work.

“We are indebted for the millions of dollars that Dick has helped us raise,” Valvano concluded. “But, most importantly, we are grateful for his friendship.”