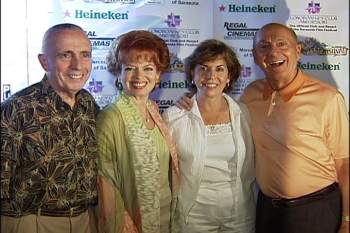 Spencer Ross, voice of the New York Knicks, and his wife joined Lorraine and me at the Film Festival.
This year I was thrilled to be asked to be the honorary chairperson for the 2007 Sarasota Film Festival. Over the past nine years, the Sarasota Film Festival has grown to one of the premier film festivals in the country. It has grown in length, (from three to ten days), attendance (from 2,300 to over 45,000) and scope (from 10 screenings to over 200 films, and adding nationally-recognized education programs, over a dozen special events, and talkbacks and panels with some of the leading voices in film today). The festival's mission is “to present unique and high-quality cinema in a festival atmosphere for the purpose of educating, stimulating and entertaining audiences” remains its guide as it selects and organizes in-festival and year-round activities.

On Saturday, April 14th, I was a part of the "Reel Experience at the Lake Club" which honored Edward Norton, Brian Koppelman, Elias Koteas, Patrick Wilson, Kim Raver, Anna Chlumsky and Dagmara Dominiczyk. Festival-goers enjoyed the signature cuisine of Michael’s On East and the jazzy sounds of The Big Z Band. During the event, we presented the Excellence in Screenwriting Award to Mr. Koppelman, and the Humanitarian Award to Ed Norton for his involvement with various progressive social causes.

All proceeds from The Reel Experience at The Lake Club supported the Festival's Award-Winning Outreach and Education Programs.

For more information on the festival, please go to: www.sarasotafilmfetival.com