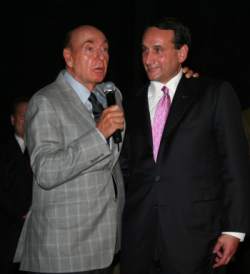 The Dick Vitale gala to raise money for the V Foundation in the fight against cancer was really a special, special evening. We honored Duke coach Mike Krzyzewski, who really wowed the crowd of close to 650 people, who paid $1,000 a piece to attend. Also honored was a local superstar, Eileen Curd, who has raised thousands and thousands of dollars for the fight against cancer. This one evening raised over $1,000,000 for cancer research - that is AWESOME BABY!

There was so much emotion and passion in that room. There were several cancer survivors in attendance, and others fighting the disease. There was so much courage there. Everywhere you looked, their were star coaches from the world of sports. I can't thank those guys enough as they paid their own way to attend, transportation, hotel, etc.

CLICK HERE FOR A GALLERY OF PHOTOS FROM THIS EVENING: