»'It's not about the talent': Patrick Ewing and the battle to avoid another lost season at Georgetown  »Lively headlines McDonald's All American roster  »CAA adding three new schools to conference  »ESPN's Vitale to miss rest of season after surgery  »Auburn No. 1 for first time in history of AP poll 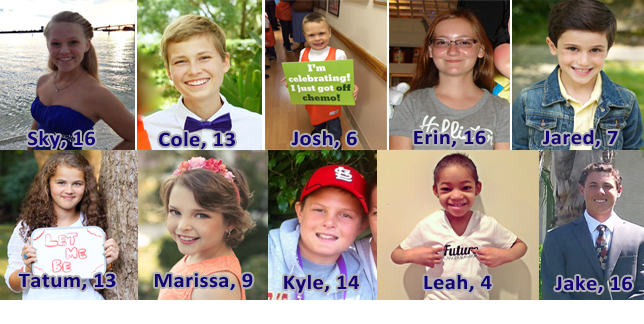 These 10 youngsters are all cancer survivors and I am excited to honor them at the 10th Annual Dick Vitale Gala this weekend.

Skyler was diagnosed in 2013 with PRE B A.L.L. (Leukemia) when a freshman at Riverview High School. She has received treatment at All Children’s Hospital for the past few years and has two more weeks to go. Skyler’s mission is to increase awareness and inspire and improve the quality of life for teens battling cancer.  She started her own Skyler’s ARMY….10,000 strong around the country and even abroad that have been inspired by her story

Cole was diagnosed with brain cancer last year and underwent surgery and chemotherapy at All Children’s Hospital. Friends raised $5400 for Cole and he insisted on donating it to the place that provided his care. After his diagnosis, Cole dedicated himself to raising money and awareness for pediatric cancer research. He has collected thousands of dollars by participating in Relay For Life, selling Cole Strong inspirational wristbands and speaking at cancer fundraising events. The arena football team, Tampa Bay Rowdies, reached out to support him and they have built a very close relationship.  He finished his treatment in October 2014.

Joshua was diagnosed at 2 ½ years old with acute lymphoblastic leukemia. He had to endure over 1200 doses of chemotherapy over a 3 ½ year time period, radiation and bone marrow transplants.  In August 2014 his cancer was officially in remission.  He loves all sports including football, hockey, soccer, and basketball and enjoys playing with his two brothers.  The family has become very active in supporting research for pediatric cancer to prevent other children from having to endure such harsh treatment.

Erin is from Sarasota and is cancer free.  She was treated at All Children’s Hospital in St. Petersburg for leukemia when she was diagnosed at 5 years of age.  She is now 16 years old and remains healthy.

Diagnosed on April 28, 2014 with leukemia, Jared received treatment at The Valerie Center at Goryeb Children’s Hospital in Morristown, New Jersey.  Dick and Lorraine Vitale have known Jared’s mother, Sue, and her family for many years. She is Senior Director of Broadcasting at IMG and Dick’s agent.

Tatum Parker from Indianapolis, Indiana is a 2X cancer survivor, diagnosed with Ewing’s Sarcoma, and now heads up her own non-Profit Organization; Tatum's Bags of Fun, which is an organization that distributes backpacks filled w/activities, games & toys to every child diagnosed w/cancer in Indiana. She is an accomplished singer and the other day she sang the National Anthem at the Notre Dame Softball game. We are happy to have Tatum and her parents, Kendra and Jayson here to celebrate our 9th Annual Gala for Pediatric Cancer research.

At 8 years old, Marissa was diagnosed with leukemia and underwent treatment at All Children’s Hospital. She used to love to dance but was forced to stop and so she began to sing and found her passion and a way to cope.  Marissa now sells her music on iTunes and donates the money to charity for cancer to help others.  Currently in remission, she has 2 more years of treatment.

Kyle is from Sarasota and is cancer free.  As a All-Star Little Leaguer, he faced his biggest battle when he was diagnosed with cancer.  He was treated at All Children’s Hospital and Moffit Cancer Center for inoperable brain cancer in 2010 and had to undergo extensive chemotherapy and radiation of the entire brain.

Leah was diagnosed last year with stage 4 neuroblastoma with a 50 / 50 chance of survival.  She underwent surgery, radiation and chemotherapy at Children’s Hospital of Philadelphia.  At the same time, Devon Still was cut from his team, starting an incredible journey for father and daughter.  Leah is now in remission, and cancer free.

Jake was diagnosed with neuroblastoma at 18 months old.  Doctors at the Children’s Hospital of Philadelphia were unsure if he would ever walk or talk due to severe side effects. After years of physical and occupational therapy, struggles and obstacles, Jake, now a junior, plays baseball for Lakewood Ranch High School.  Jake has dedicated himself to helping others from a young age, participating in a lemonade stand to raise money for two fellow baseball players who suffered from leukemia, making blankets and donating toys to a local hospital that housed terminally ill children who had cancer.  He raised over $10,000 for the V Foundation earlier this year with an event he started – Baseball with a Purpose – at his school, Inspirational Academy.