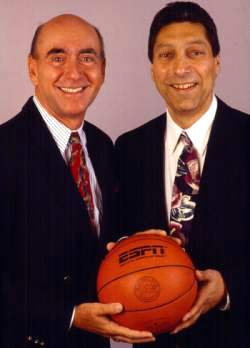 The V Foundation for Cancer Research was started in 1993 to honor Jim Valvano. From very humble beginnings of Jim's personal friends and family, The Foundation grew. Today, that circle of friends has expanded and the support structure of The Foundation includes people of all walks of life, those who knew Jim personally, those who knew of Jim and many who have joined the cause simply because they believe in the possibility of Jim's final wish - to fund research to find cures for cancer.

Today over 12 million people are Cancer Survivors. We plan on raising 1 million dollars for a Pediatric Cancer research grant.

To make an individual donation to benefit a family member or friend that is a cancer survivor or just to simply help us reach our goal of 1 million dollars, please send your donation made payable to the V FOUNDATION to: Dick Vitale, Inc., 7810 Mathern Court, Bradenton, FL 34202

I thank you from the bottom of my heart as your dollars will help us immensely in reaching Jimmy's goal of stamping out this disease. MORE INFORMATION about the V Foundation.

LISTEN TO Holly Wright's (mother of Payton Wright, the 4 year old girl who lost her battle with cancer) talk at the 2008 V Foundation Gala.

The Press Release below may be downloaded here. (pdf)

UK and UNC fan sites ask followers to show who has the biggest heart!

Both www.KentuckySportsRadio.com and www.TarHeelBlue.com will be primary hosts for the “Heart of the Program Challenge” to determine which fan base from two of college basketball’s all-time winningest programs can raise more funds for The V Foundation between now and the May 20th event in Sarasota, Florida. The Vitale Gala annually raises money for The V Foundation in honor of Dick’s good friend, the late Jim Valvano.

“It’s an incredible privilege to be honored with Coach Williams on this special night and it’s something I hope all of the Big Blue Nation will join in supporting - and attending,” said Coach Cal, whose mother, Donna, lost her brave fight with cancer this past November. “We want to make this the biggest gala yet and help Dick and Lorraine Vitale and The V Foundation with their ongoing efforts to defeat this terrible disease.”

“I’m truly flattered to be honored as part of the Dick Vitale Gala, not
only because of the enthusiasm and passion that Dick and Lorraine have for fighting this awful disease, but to honor the memory and legacy of Jimmy Valvano,” Coach Williams said. “I am proud to have coached against Jim as Coach Smith’s assistant and admired not only the way he shared his love for his family and for the game of basketball, but the dignified way in which he lived his final days.

“The V Foundation has done outstanding work in research and education and I am privileged to help them continue the fight with Coach Calipari,” he said. “I hope Tar Heel fans will lend their support and join my family and me at the Gala in Sarasota in May.”

Fans from both schools will be able to donate through customized links at those two sites, in addition to links at www.CoachCal.com. Those wishing to donate on behalf of Coach Calipari should visit www.jimmyv.org/coachcal; those showing support for Coach Williams can visit www.jimmyv.org/coachwilliams. The fan base that contributes the most money will be presented with a trophy that can be proudly displayed in the office of their coach.

“We have a great on-court rivalry with UNC, but cancer is a battle we all need to fight together,” said KentuckySportsRadio.com’s Thomas Beisner, who originated the contest idea. “The opportunity to help Dick Vitale and The V Foundation for Cancer research in their efforts is one we are all thrilled to be a part of.”

Net proceeds from the contest and the Dick Vitale Gala will go to fund pediatric cancer research. Past honorees at the Gala include Tom Izzo, Tony Dungy, Rick Pitino, Billy Donovan, Bob Knight, Pat Summitt and Mike Krzyzewski. Fans can also send donations by mail (c/o The V Foundation, 106 Towerview, Cary, NC 27513) or by calling 1-800-4JIMMYV. Please mention that you are donating to the “Heart of the Program Challenge” and indicate which coach you are supporting.

About The V Foundation

The V Foundation for Cancer Research was founded in 1993 by ESPN and the late Jim Valvano, legendary North Carolina State basketball coach and ESPN commentator. Since 1993, The Foundation has raised more than $100 million to fund cancer research grants nationwide. It awards 100 percent of all direct cash donations and net proceeds of events directly to cancer research and related programs. Administrative and fundraising expenses are paid by the Foundation's endowment. The Foundation awards grants through a competitive awards process strictly supervised by a Scientific Advisory Board. For more information on The V Foundation or to make a donation, please visit www.jimmyv.org.

The Press Release above may be downloaded here. (pdf)